Green Dragon Kung Fu Vernon
Master Jostein Haugland
Our Grand Master is Master Mark Chan Wah and the chief instructor is Master Jostein Haugland.  It is to them we owe gratitude for all that we have learned. Master Jostein Haugland has been practicing martial arts for over 50 years. He has extensive knowledge of several Chinese styles in addition to Filipino stick and knife fighting. The primary style of kung fu which we focus on in VERNON is called WING CHUN. However we also practise Hung gar, Bok Mai, Sil lum, Bok Hawk Pai and Southern Dragon. Our kung fu has it's roots in Vietnam, Hong Kong and Toishan.  Master Jostein Hauglands  Wing Chun teachers were Benedict Wong and Victor Soo.  And of course Master Chan with whom we all still practise. While these systems have differences they also have great similarity. Because of their similarity it is believed they have similar origin. We benefit in having knowledge of all the styles. 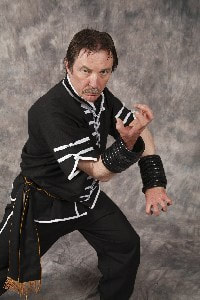